Across The Purple Sky 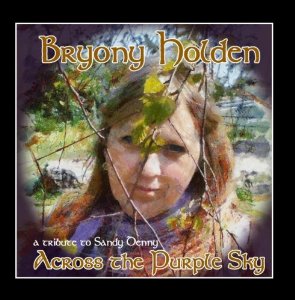 Bryony Holden has released a tribute album to Sandy. It was released digitally on the 35th anniversary of Sandy’s death (21 April) and is well worth checking out on itunes.

It’s also available as a CD on demand from Amazon US (but not UK).

“Across The Purple Sky was a labour of love, a joy of a project. For as long as I can remember, people have made comparisons between my voice and Sandy’s and although they are not the same, there are similarities. I grew up in the 1960s, and Sandy was, of course, one of the hub of influences from those paisley patterned, patchouli-scented times. I'd remained determined NOT to make a tribute for so many years but eventually gave up resisting the many requests as it seemed the time was finally right. My sister, Erin, was more than up for the task and not only lent her fine instrumental skills, but produced, mixed and mastered the project. Trying to touch on so many aspects of Sandy's work, we chose the tracks to span as much as possible in a short space, covering some of her work with Fotheringay and with Fairport. It was almost impossible to choose and we recorded more than the ten on the album. At some point, it is likely to be produced as a full CD… and those extra tracks will be added. What an amazing performer… what an amazing woman. Sandy Denny, much loved and respected muse… thank you.”


In other news, Dave Swarbrick has given an  interview to folk blogger Emma Hartley. He talks about Sandy, among other topics, reminding us how difficult it was for him to do the tribute shows in 2008 and 2012: “You’ve got to understand, I have never got over her dying.”

There was also an event at Banbury Folk Club on 19 June, “Linda Watkins and Friends Sing Sandy”, which sounded interesting for anyone in the Oxfordshire area.
Posted by Philip Ward at 11:32

Dear philip just got delux rising for the moon good to hear lwt dawn do you knowabout the Weastward TV Fairport programe half hour of Sanndy rising for moon and mr lacy i recorded it on an old reel to reel tape recorder on last legs i made two copies of it one to dave pegg the other one to ian bergess the sound is very bad but if someone has a better copy or the original video tape servives that would be wounderfull yours sincerly d-macmanus@sky.com

Thanks for getting in touch. Actually, I wrote about the Westward programme in my book (p50). We searched high and low for video but in vain. I've heard audio taped off air when the programme was repeated on Yorkshire TV. I wonder if that's the same as your recording? Anyway, the sound quality is pretty bad, so it was a thrill to find White Dress on LWT in decent sound AND vision.

Dear Philip of corse i got your book next to the other one by ch. i recorded the weatward Fairport show when it was shown on Harlech TV so hopefully there are more than two copies of it oh god i hope so when i gave a copy to Dave Pegg he said that it was recorded on Sandy and Tervors wedding day , is there any way to apeal to anybody to look for other home recordings of this show, some one with a better tape recorder , i find that playing it brakes my heart as untill the BBC video it was the only time that i saw Sandy also i worry about wareing the tape out or causeing more dammage to it ,it may be lost missing or wiped but just maybe in someones cupord or attic or skip somewhare it is lurking all the best D Mac Manus

Something awry with those dates. The wedding was Sep 73; this show was recorded in Sep 75. FC had a TV appearance (or recording?) in Plymouth the day after the wedding, which Peggy has talked about - must be the occasion he was thinking of. Sandy wasn't in the band in 1973.