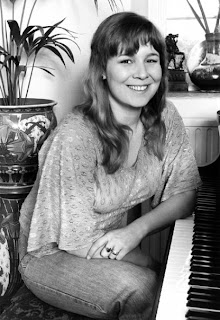 (Photo: Sandy Denny at home in Byfield, mid 1970s)
Byfield is the village in Northamptonshire, about half way between Banbury and Daventry as the crow flies and the A361 meanders, where Sandy Denny lived for the last four years of her life. I was lucky enough to pay a visit recently. Here are some photos from that day (courtesy of Andrew Batt, who took them).

The house. The willow tree at the extreme right is clearly visible in photos of Sandy sunbathing in the garden which were included in the Live at the BBC booklet: 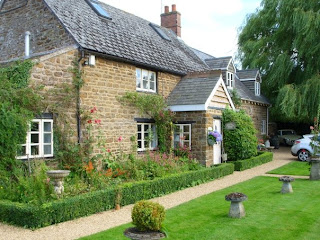 The house, from the opposite end. In the foreground is the barn, which Sandy used as rehearsal space, since converted into living accommodation: 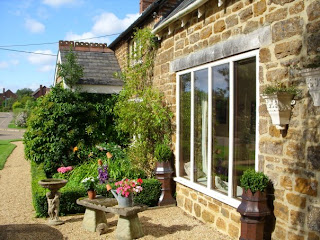 The Village Hall, where Sandy made her last public appearance in April 1978: 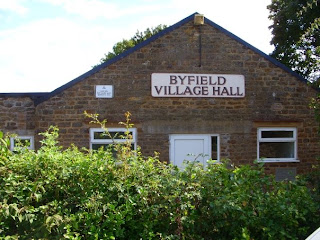 And the shaded pathway to Holy Cross Church: 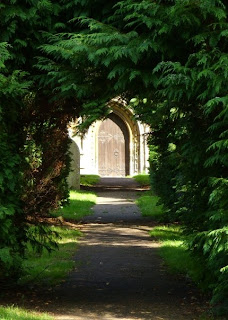 The Rectory contained a stained glass of ‘Reynard the Fox’: 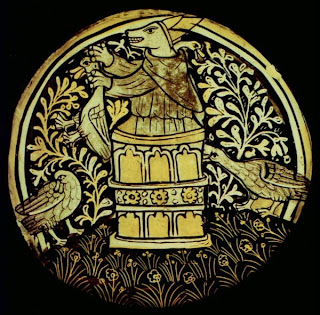 The illustration, showing Reynard in clerical dress preaching to a flock of geese, draws on the medieval Reynard allegories. The link to ‘Reynard the Fox’, the folksong that was in Denny’s repertoire, is, I admit, somewhat tenuous (though there be foxes in both). At the risk of stretching it to breaking point – and without daring to utter the pompous word ‘synchronicity’ – let me add a plug for a wonderful book I happened to be reading at the time of my visit, Peter Burt’s Fables:

‘What was school like 65 million years ago? Do bees have intimations of immortality? Do frogs respond well to psychoanalysis? Why was the nightingale in Keats’ garden regarded by his fellow creatures as a disgraceful reprobate? Meet Magnanimouse and his laboratory cagemate Alphonse, Doctor Spineswine the prickly philosopher, Twenty-First Century Fox, Formby the lion of two worlds and a whole supporting cast of friends from the animal kingdom (or somewhere not too far removed from it). In twelve tales with settings ranging from the late Cretaceous to the present day, they reveal the answers to these and other pressing questions of contemporary zoology.’

Burt’s ‘Twenty-First Century Fox’ is Reynard’s brother in adversity. Buoyed up by the Labour landslide of 1997 and the incoming administration’s promise to outlaw hunting with hounds, our vulpine hero leaves his rural foxhole and migrates to the city, in search of liberal attitudes and a foxier class of vixen. But it’s no go. Buffeted between ‘Natural Enemy No. 1’ (mankind) and ‘Natural Enemy No. 2’ (dogkind), disillusioned by a grinning Prime Minister who tears off that ‘fox-friendly mask’ to reveal ‘the same cunning old dog’ underneath, he is driven back whence he came, brush between his legs. Not even Sandy’s Reynard, with the ‘jubal hounds’ a-pressing upon his life, has a more wretched time of it.
[Note. The photos of Denny’s former home are published with kind permission of the present owners. Please respect their privacy by not republishing them elsewhere.]
Postscript, February 2012. Further images of the Byfield interior, including the kitchen with vintage jukebox, are published in: David Roberts, Rock Atlas: 650 Great Music Locations and the Fascinating Stories Behind Them (2011), pp154-6.
Posted by Philip Ward at 17:32