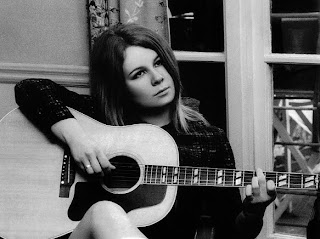 Research for the new box set has unearthed a previously unknown early home recording. The lyrics are hard to make out but the following gives an approximation. It may be an original, but if so, with its cod mythology and sword-and-sorcery medievalism, it’s not quite like anything else Sandy ever did. It’s also delivered over (what is for her) an unusually fast finger-picking accompaniment. Any help in identifying it would be appreciated. She had several cracks at it, with slight changes of wording, hence the alternatives transcribed below. I find the lyric vaguely reminiscent of early Marc Bolan, for example ‘Aznageel The Mage’ on Tyrannosaurus Rex, Prophets, Seers and Sages: The Angels of the Ages (1968).

On a shrine of black flowers M... lay dead
As he had for thirteen centuries
At his feet five crows stood and watched to his keep
And the whisper of time sighed around the hills

P... has tried fair winged [weird] for it stead
Though the sky's in search of a [the] star
And the serpent entwined about the stag's head
Tried to reach out and poison her hair.

P... took her form and she stabbed [pierced] the serpent's eye
And he fell through the clouds to the land. [sea]
As she rode on and on through the blazing sky
With horizons of light in her unsung [till she came to …]

It was then that the daylight became the dark night
[And] she recalled [remembered] what the … [sermon] had said:
When the night becomes black and no sound can be heard,
You have come to the land of …

And the star became bright and it shone on the land
And the shrouds of darkness were gone
And M... was standing beside [before] P...
And the light came to bear in her hair.

Mojo has a preview of another of the unreleased tracks, an acoustic demo version of 'I'm A Dreamer'.
The Guardian has a preview of some photos from the box set.
Bob Harris's radio documentary about Sandy, first broadcast in 2008, is to be repeated on Wednesday 4 August 2010, BBC Radio 2, 10pm.
[Be sure to check out my new music blog Brush on Drum.]
Posted by Philip Ward at 16:42

Email ThisBlogThis!Share to TwitterShare to FacebookShare to Pinterest
Labels: Ethusel