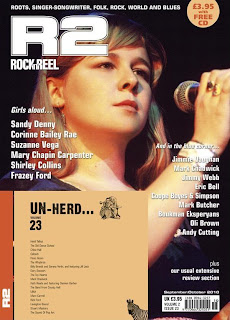 “Don’t listen to her! You’ll realise that the rest of us are wasting your time.” – Rachel Unthank on Sandy Denny, quoted in Universal Music press notice, 2010.

Release date for the new box set of Denny’s work may have been put back to the third week of November but a veritable publicity blitz has already begun. First off the blocks was Rob Young in the October issue of Uncut, with a detailed biographical piece spread over five pages. Rob is very much the man of the moment: Electric Eden (Faber and Faber, 2010), his vast, encyclopaedic history of the English folk movement, has rightly won plaudits from critics and readers alike. Also out now is the September/October issue of Shindig! featuring an interview by Andy Morten with box compiler Andrew Batt. The September/October issue of R2 (formerly Rock’n’Reel) has the distinction of being (if I’m not mistaken) Denny’s first magazine cover since she graced the inaugural issue of Zigzag in 1969. The October fRoots has a feature by Mike Wilson (on sale from 23 September). Kingsley Abbott's 5-page article in Record Collector (October) is to be recommended, as is Sid Smith's 4-page profile in Classic Rock Presents Prog (December issue).

Frank Zappa once dismissed rock journalism as "people who can't write, interviewing people who can't talk, for people who can't read." I think his old friend (and sometime squeeze, if you believe the stories) is coming off better than that at the hands of today’s music writers.
The Radcliffe and Maconey show on BBC Radio 2, Monday 8 November, 8pm, will devote a “Listen and Learn” feature to Denny. Listen again for seven days here (00.32 to 00.49).

A radio news item from 6 Music gives a taster of the newly discovered ‘Lord Bateman’ vocal.

[Now also blogging at Brush on Drum.]
Posted by Philip Ward at 16:00

Thanks for these Philip; very helpful for those of us still trying to justify the massive $ for the box set...

What is the release date for the box set?
As someone who has ordered the Premium version from Island's website, I would love to know the official release date.
It has changed from early October to November 1st, then November 8th and today on Amazon.co.uk it is Nov. 15th!!

I saw Andrew Batt (compiler of the Sandy box) last night at the Kirsty MacColl tribute gig and he told me the target release date is "second week of November". After halloween and before late November. Delays in Italy (printers, I believe.)

Thanks Philip.
I had an email from the suppliers today saying sorry for the delay and that it is now due for release on the 15th of November.
I also received my copies of fRoots and R2 that I ordered online today so it's all Sandy related this afternoon for me!
It would be kind of nice if it was Late November as it was such a great Sandy song!