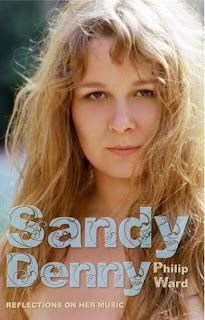 Early news of my forthcoming book about Sandy:

This will be available through all good bookshops, from Amazon UK or direct from the publisher. It’s a collection of my writings on Sandy which have appeared in magazines, album notes and online over the years, together with new material and a host of photos, some of them previously unpublished.

‘…In this book Philip Ward, who has made a close study of the artist, presents a series of personal ‘reflections’ on her life and work. He fills in details overlooked by her biographers, surveys recent reissues of her recordings and offers the first in-depth analysis of her songwriting. He looks back to the public events marking the thirtieth anniversary of her death and assesses her alongside some of her contemporaries. In the author’s words, the book is ‘a series of experiments’ in how to write about the subject. It concludes with a detailed essay arguing the case that, long before Amy Winehouse or Kate Bush, Denny was the first British female singer-songwriter of international stature.

“Philip Ward's analyses of Sandy's songs are original, thorough and insightful. I learned a lot from reading them.” – Joe Boyd, record producer.’

If you see material disappear from this blog or from my website, that’s because it’s in the book.
Posted by Philip Ward at 14:10

Good news, Philip!
Although I've read everything on this blog and your exploration on her music on 'the other' website, I think it's still worthwhile to have this and the things I have not read yet (lots of the last, I hope), in a nice book on paper.
I remember reading your introduction on 'the other' website just about two years ago. Nobody was interested in publishing your text.
Things have surely changed..

I like the photo on the cover. Don't think I ever saw it before. I saw Fairport live only once, in 1976, in the Netherlands. And I visited England in both 1976 and 1977. I still regret never seeing Sandy live, Although she visited the Netherlands quite a few times in the seventies.
This photo reminds me what I missed. She could be beautiful..

Congrats! I am looking forward to this as I know it will come from the heart! And yes, I have always felt that Sandy was such a gorgeous woman! Truly effortlessly beautiful!!!!

Good on ya, Philip!

Cheers & good luck with the book.

I've read your blogs here many times. It will be great to have them collected together as a permanent record in a book. I've pre-ordered my copy.