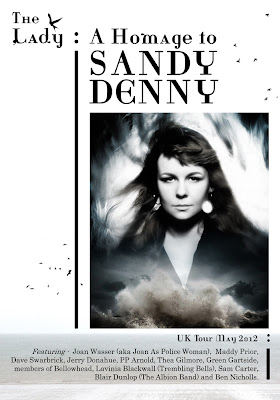 The Lady: A Homage to Sandy Denny
A special UK tour in May 2012 commemorating Sandy's songwriting legacy.
In the years since her death, Sandy has emerged as one of the UK 's greatest singer-songwriters. Her classic song ‘Who Knows Where the Time Goes’ has been recorded by a diverse range of artists including Cat Power, Nina Simone and Judy Collins. This special tour celebrates her legacy for a new generation and showcases for the first time her entire songbook taking in her work with Fairport Convention, Fotheringay, her solo career and the new songs completed by Thea Gilmore on her acclaimed album ‘Don’t Stop Singing’.
Thea will join a unique line up of artists including former colleagues and friends Dave Swarbrick, Maddy Prior, and Jerry Donahue, alongside Joan Wasser (aka Joan As Police Woman), PP Arnold, Green Gartside and young admirers including Lavinia Blackwall (Trembling Bells), Sam Carter, Blair Dunlop (The Albion Band) and Ben Nicholls. Together with members of Bellowhead, who form the core of a house ‘super group’, they create this unique, adventurous homage to the artist described by Richard Thompson as ‘the greatest British female artist of her generation’.
TOUR DATES AND BOOKING INFORMATION
May 19: LIVERPOOL Liverpool Philharmonic 0151 709 3789
May 20: NOTTINGHAM Royal Centre 0115 989 5555
May 21: BRIGHTON Festival 01273 709709
May 22: COVENTRY Warwick Arts Centre 024 7652 4524
May 23: LONDON Barbican Centre 020 7638 8891
May 24: BASINGSTOKE The Anvil 01256 844244
May 27: GATESHEAD The Sage Gateshead 0191 443 4661
May 28: MANCHESTER Bridgewater Hall 0161 907 9000
[Produced by Andrew Batt and MBM]
Posted by Philip Ward at 14:02

Had sandy Denny's daughter been invited to the tribute tour

I understand she is not coming.