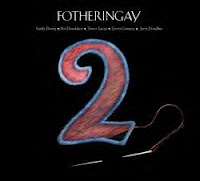 I don't usually go in for advertising on this site but I'll make an exception to draw attention to an important new release from Fledg'ling:

'Fans of Fotheringay rejoice - the nine classic performances on their debut album are soon to be joined by eleven more studio recordings. Jerry Donahue has been working for many, many months reviewing all the recordings to finally bring this remarkable project to conclusion.

After several years of careful research in dusty tape archives, the surviving members of Fotheringay have been able to complete their second album begun back in 1970. It is very, very rare that musicians get the chance to complete a project begun 38 years previously. Fotheringay 2 will be released on Fledg’ling Records on 29th September 2008.

Fotheringay remain one of the great might-have-beens of British music. They lasted less than a year, and released just one album, but their disappearance robbed the early-’70s scene of a group of musicians capable of taking folk-rock to new heights of subtlety and musicianship. Now, the nine songs on that debut album, assumed for almost four decades to be their sole testament, are joined by the eleven that would have constituted a follow-up. Sadly they broke up during the recording sessions for that second album. Incredibly all the tapes survived in various record company archives. Guest musicians include Rabbit Bundrick on keyboards and Sam Donahue (Jerry’s father) on saxophone.

There's a sample track from the album, a wonderful vocal take on 'Wild Mountain Thyme', up at MySpace and a telephone interview with Jerry Donahue about the project at Folk Alley.

Colin Randall over at the Salut! Live website is running a competition for ‘your best or most vivid memory of Sandy, Fotheringay, Fairport with Sandy, Sandy solo, Sandy on record.’ He has three copies of Fotheringay 2 to give away for the best entries.

My review appears in the November/December issue of Rock'n'Reel. Five stars - it deserves no less.

The surviving members of the band gathered at a launch party in Huddersfield. (Below l-r) Jerry Donahue, Pat Donaldson, Gerry Conway. Photo by Martin Hair (used with permission). 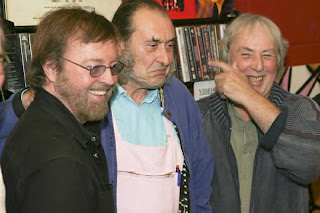 In preparation for an article I was writing on the background to the new album, Gerry Conway kindly agreed to answer my questions by email. Here are some of his replies (reproduced with his permission):

PW: Fotheringay 2 - how did you feel listening to and working on this material 37/38 years on?

GC: Because of the friendships that were formed all those years ago it felt perfectly natural to carry on working on the tracks. Our rapport with each other was just as good if not better for the passing of time.

PW: How much of what we hear on the second album was recorded anew?

GC: I replaced the drums on ‘Two Weeks Last Summer’ and added some percussion. I didn’t feel that I could live with the original. I thought it would be nice to add the harmony vocals that appear on different lines. For reasons unknown there wasn’t a drum track on ‘Wild Mountain Thyme’ so that was added. We tried some harmony vocals but I thought Pat sounded best duetting with Sandy. I love what he did. ‘Bold Jack Donahue’ was extended at the end so I added some tom toms to match the ones at the front of the track.

PW: What was your impression of Sandy the first time you met her? Was that in your Eclection days?

GC: Yes I was with Eclection then. I thought Sandy was very shy and very humble when we first met. She and I got on very well and I enjoyed her company very much.

PW: Did songs like ‘Nothing More’ and ‘The Sea’ already come as demos from Sandy with fixed ideas of how they should be done, or were the ideas ‘worked up’ in the studio?

GC: Sandy’s songs were usually complete when she played them to us for the first time. Arrangements and parts were arrived at in an organic way. That is to say, songs were played over and over until they sounded good. Sandy never told us what to play but you knew instinctively when she was happy with what you were doing. We mostly rehearsed at Sandy and Trevor’s place in Fulham.

PW: Who was the bandleader? From the first album you’d guess it was Sandy, as she dominates the vocals and songwriting. But the second album, with Trevor’s contribution prominent, sounds more like the equal-parts democracy that she wanted the band to be.

GC: There wasn’t a band leader as such but for my part I felt that Sandy was the teacher and I was the pupil. Trevor was very ambitious for the band and often came up with grand ideas that didn’t fly but we had a lot of fun trying.

PW: Was the Albert Hall gig with Elton John really as scary as has been suggested?

GC: Not scary just a bit daft. Pat and I had been doing sessions with him and thought he was a great singer and player. We didn’t know anything about him and certainly didn’t know that he had a full scale rock and roll show. Not the perfect opener for Fotheringay but one for the grandchildren.

PW: Nick Drake toured briefly with you. Any memories?

GC: I don’t remember the tour unfortunately, only being in the studio with him once at Sound Techniques but I don’t think the tapes survived.

PW: The only archive film of Fotheringay is from German TV Beat Club. The band looks very relaxed. Do you remember that session?

GC: We would have been doing European dates at the time and probably dropped in to record it very quickly between gigs. When I first saw it I was shocked to see how young we all looked. It’s very nice to have though.

PW: The farewell gig in 1971 must have been emotional? I’d love to have heard Sandy’s take on ‘Let It Be’: was that solo at the piano?

GC: To be honest I’m not sure but we probably would have played along with her having found ‘ourselves in times of trouble’.
Posted by Philip Ward at 21:09

Good news about the second album!

My Fotheringay CD has two bonus tracks, 'Gypsy Davey' and 'Two Weeks Last Summer'. Will these titles on the new Fotheringay album be different versions?

Yes, all the vocals are different from previously published versions. The CD booklet explains that they’re ‘guide’ vocals, recorded live with the rhythm section, with the intention of replacing them during later overdubbing sessions. Of course, for Sandy ‘later’ never happened. I think you’ll like this album!

I was in the pre-order list and I received tha album a couple of weeks before official shop release. It's sounds no less than fantastic. Just five stars? ;)

Thanks for the mention of Salut! Live....any Sandy anecdotes warmly welcomed. Can anyone confirm my own fading memory that Fotheringay were on the bill of a musically promising but utterly chaotic festival near Halifax when the time the band was still in existence. The story at the time was that the organiser, overwhelmed by debt and logistical nightmares, disappeared on the second day, leaving most people unpaid! Gerry Conway, to whom I spoke last night, thought it possible they were there, but was as unsure as me. I just know I saw Fotheringay only once and that I think that's where it was.

Greetings, Colin. According to the chronology in the back of Heylin's Sandy biography, Fotheringay played the Yorkshire Folk, Blues and Jazz Festival, Krumlin, Halifax on 15 August 1970.

I was at that disastrous (weather-wise) festival and Fotheringay were definitely there. I had stayed in the all-night folk tent on Friday so on the Saturday night I had huddled down inside my plastic bag against the rain and fell asleep only to discover on waking that I had missed Fotheringay! My mates hadn't realised I'd fallen asleep - I was gutted. However, I got to see them a few months later at Newcastle City Hall. That first Fotheringay album is still one of my all-time favourites and I also loved Jerry Donahue's musical archaeology/reconstruction for Fotheringay 2. Now I'm looking forward to the new box set.

Thanks for the comment, Paul. It does sound pretty disastrous! There's an account in David Buckley's biography of Elton John, with an anecdote about Elt and Sandy sharing a drink in a caravan (sheltering from the elements, presumably). This website has collected pictures and memories of the event: http://www.ukrockfestivals.com/Krumlin-festival-1970.html