The Lady at the Barbican 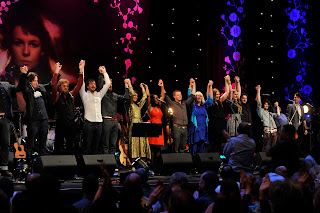 As readers of my book will know, 2008 saw a notable tribute concert at London’s Queen Elizabeth Hall. In the words of the organiser, ‘it was designed to avoid the mawkish and place the focus firmly on Sandy’s songwriting’. A little over three years on, that concept has taken wing in the form of an eight-stop tour of English cities. Playing to sold-out houses and earning standing ovations, it landed in London last week, where I was lucky enough to see it.

The Barbican concert wasn’t about egos; it wasn’t a ‘talent’ show, with tear-stained contestants and acid-tongued judges. Nor was it an exercise in biography with musical illustrations. (I didn’t catch Patrick Humphries’ pre-concert talk, but I’m sure he provided all the context a newcomer would need.) No, this was a celebration, by a variety of artists from different generations and different backgrounds, of Sandy’s musical legacy.

Twenty-five songs. What a feast!

Maddy Prior had never sung Sandy’s own compositions before, but you wouldn't guess it as she ranged easily from the madrigal inflections of ‘Fotheringay’ to the angry dissonance of ‘John The Gun’. Unlike the thunderous majority, I don’t share in the general rapture over Thea Gilmore’s completion of Sandy’s unfinished songs. I find the whole project slightly dubious. However, Thea is a powerful stage presence, and there’s no denying her uptempo contributions (‘London’, ‘Don’t Stop Singing’) varied the mood. Lavinia Blackwall of Trembling Bells was perfectly cast for the folkier end of Sandy’s output. Her ‘Quiet Joys Of Brotherhood’, which she’d arranged in three-part harmony with Prior and Gilmore to back her, was one of the most beautiful things I’ve heard in ages. 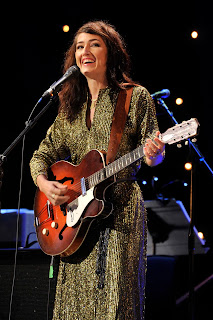 For me, the two American contributors, both from way outside the English folk-rock axis, were the revelation of the night. As she left behind her folk roots on the later solo albums, Sandy was edging towards a more ‘accessible’ style, and arguably a more ‘American’ style. This is what American singers bring out when they cover her songs. Joan Wasser (aka Joan As Policewoman) delivered two superb numbers at the piano. Palpably savouring the rich chordal progression of ‘The Lady’, Wasser hinted at the song’s jazz potential, and I found myself thinking of another great artist called too soon to the studio in the sky – Laura Nyro. Meanwhile, PP Arnold, looking extraordinarily young for her 65 years, comes from yet another tradition. With heavy vocal backing in the chorus, ‘Take Me Away’ became the epic soul number we never realised it was. Indeed, PP likes the song so much she has recorded it; a download is available from her website. 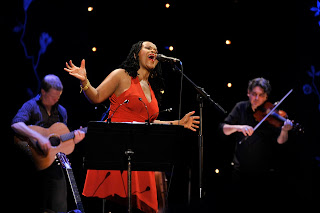 So this night belonged to The Lady and it belonged to the ladies. I have to say the male singers left me underwhelmed. I recall Green Gartside from the Nick Drake tribute a couple of years ago, but he made no stronger impression here than he did there. While Blair Dunlop (son of Fairport founder Ashley Hutchings) is a talent to watch and Sam Carter was sharp and to-the-point, soloing on ‘Bushes And Briars’ and duetting playfully with Swarb on ‘It Suits Me Well’, I missed two of the more distinctive talents that had adorned the QEH show in 2008:  Johnny Flynn and Marc Almond. Both had prior commitments, alas.

As encore, we finished inevitably on ’Who Knows Where The Time Goes?’ tutti. One dyspeptic reviewer in a national newspaper took exception to the ensemble turning this quietly contemplative ballad into a soft-rock anthem for massed forces. I (sort of) know what he means – it received similar treatment in the ‘Daughters Of Albion’ concert at the same venue in 2006. But it’s the song everyone in the audience expects to hear and everyone on stage wants to sing, so the format is almost pre-ordained.

Members of Bellowhead provided a strong house band throughout, augmented by Fairport veterans Jerry Donahue on electric guitar and the irrepressible Dave Swarbrick on violin.

The BBC were filming the show for television (transmission at a later date, as yet unknown), which seemed to give extra edge to the performances. It certainly added to the nerves, causing even artists as experienced as Maddy Prior and Pat Arnold to suffer false starts.

The gig, and the tour of which it formed part, were a massive team effort and team success. But we should single out for mention producer and compere Andrew Batt. Andrew has done more than most in the last five years to bring Sandy’s work to a wider public and to ensure that it has a future. As well as producing the 2008 tribute show which formed the template for this tour, he researched and compiled the massive 19-CD box of her Collected Works and the recent ‘deluxe’ reissues of the solo albums. I doubt that anyone outside the ‘business’ understands just how much work is involved here, especially in putting together a multi-artist, multi-venue tour like this one. So hats off to Mr B!

And then, still hatless, let’s raise a glass to Ms Denny, without whom none of this would be happening.

No More Sad Refrains - Joan Wasser
Who Knows Where The Time Goes? - ensemble

Not that I'd want to, but I couldn't add a single note of disagreement to your review, having seen the Gateshead version last night (except possibly about Thea).
I suppose it is inevitable that critics think they have to tear apart the work of others, but some of the other accounts I have read have had me wondering if I'd seen the same production.
So, thanks for your balanced and rounded account. It was a night to enjoy and remember.

I have just watched the TV show, having not been able to see it live. It was magnificent, and I think Lavinia, Maddy and Thea as a trio were amazing!

Thanks @29 May.
Agreed @11 Nov. I think I detected a small gaffe by Swarb in his interview before 'Quiet Joys'. He said the tune was 'Blackwaterside' - surely it's 'My Lagan Love'?