Due for release on 22 April, I've Always Kept A Unicorn is a 40-track double album of demos, live, radio and TV recordings capturing the singer-songwriter at at her most intimate in stripped-down arrangements of her repertoire. It features three previously unreleased recordings: demos recorded at Richard Branson's Manor Studios in December 1971 for the rock'n'roll covers album, Rock On. (The songs are Buddy Holly's 'Love's Made A Fool Of You' and 'Learning the Game' and, a duet with Linda Thompson, 'When Will I Be Loved' by Phil Everly.) The set is compiled by Andrew Batt and comes with sleeve notes by Mick Houghton.

This coincides with the paperback publication of Mick's biography of Sandy, also titled I've Always Kept A Unicorn.

Another book to look out for is Here She Comes Now: Women in Music Who Have Changed Our Lives, edited by Jeff Gordinier and Marc Weingarten. It's a collection of essays on artists as diverse as Dolly Parton, Nina Simone, Bjork and Taylor Swift and includes a chapter on Sandy by Rosie Schaap. First published in the US last year, the UK edition is out on 7 April.

On 27 April, as only the third recipient of such an honour, Sandy will be inducted into the BBC Radio 2 Folk Awards Hall of Fame. This will be part of an event at the Royal Albert Hall and tickets are still available from the Albert Hall box office. (The event will be broadcast live on BBC Radio 2 and will be available to watch online via live stream on the Radio 2 website. It will also be available to watch on the BBC iPlayer and the Red Button service. I believe these services are restricted to the UK.)

On to an interesting little biographical nugget... Sandy's childhood address in Wimbledon has always been given as Worple Road. But it seems the family also lived for a time round the corner in Stanton Road. How do we know? Because a secondhand copy of How To Know British Birds has turned up, inscribed, in a childish hand, "S. Denny" with an address in Stanton Road. Derrick Knight, who lived just down the road, remembers the family. Considering the significance of birds in Sandy's lyrics, I find it wonderfully apt that this childhood possession has resurfaced years later. You can read the whole story on Derrick's blog. Thanks also to Dr Neil Gibbs, now the proud owner of this little volume, for bringing his find to my attention and sending me this photo of the endpapers where the young animal-lover has doodled her favourites: horse, dog and bird. (Click on image to enlarge.) 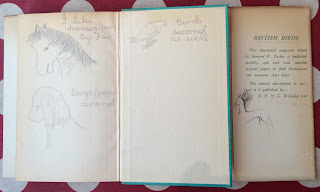 And finally, another correspondent has kindly sent me a copy of Mainsheet, "the magazine of the Society for Sailing Barge Research". Not a journal that had come my way before, I confess, but this issue included an article about Rowland. the vessel that was home to the famous Barge folk club in the 1960s. One contributor says that "the council closed the club down as the narrow companionway was considered a fire-risk". I must say, from what I've read, it sounds as if the downstairs performing space, lit only by candles - "dusty black windows to light the dark stair", as Sandy puts it - would have been the primary risk. There are photos of the vessel later, sunk at her moorings with damaged bow, before being broken up at the Thames Conservancy Yard. There is always something poignant about a ship being "broken up". Perhaps it's because we personalise them, calling them "she" instead of "it"?
Posted by Philip Ward at 10:22