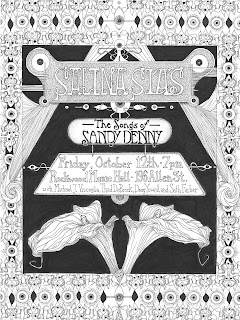 Salina is a New York-based singer-songwriter who has become a great Sandy enthusiast, keen to spread the word. She writes:

‘…I discovered her work thanks to Robin Millar, also known as “The man behind Sade” and one of the UK’s most successful record/music producers.  He was kind enough to lend an ear and give me advice – he was the one who introduced me to the names Sandy Denny and John Martyn.  He thought, perhaps, my original music was influenced by their work.  I love being influenced by someone I did not know – a kind of karmic ethos.’

Interesting lady – a daughter-in-law of Norman Mailer, no less. If you’re a fellow fan in the NYC area, I’m sure she’d be delighted to see you at her gig.

Postscript 6.11.12: some fan footage has appeared on YouTube showing Salina's version of  'Autopsy'.
Posted by Philip Ward at 15:56