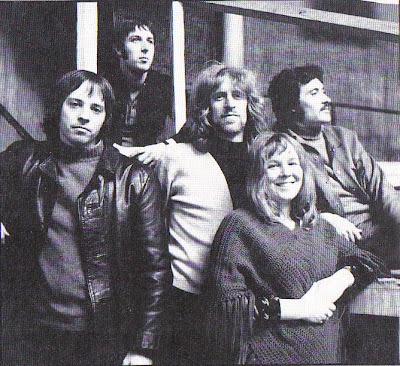 Veronica Jill Broun Conway, former wife of Fotheringay drummer Gerry Conway, has written a memoir of her eventful life. Her book Peregrine – A Pilgrimage to a Holy Place is ‘the story of a war baby born into an upper-class Scottish family who went to London in 1970 and met some extraordinary people’. Jill has kindly offered me draft extracts from her book, which I reproduce here with thanks.

In 1970, sick of Scotland, I upped and went down to London with a fiver in my pocket. I crashed with my cousin Lizzie Egerton-Tatton, who was living with Roy Guest. Roy did not mind me joining his impromptu harem; in addition to his girl friend Barbara and her best friend Lizzie, a girl friend of Joe Boyd’s lived there. Roy loved girlies! He managed the singer-songwriter Al Stewart and the folk-rock group Fotheringay headed by Sandy Denny, who was voted Britain’s top girl singer in 1970. When I first clapped eyes on the band they were living together in a rented house in Chichester. My cousin Lizzie went down to visit them there and had a one-night stand with the aloof and sinister-looking drummer Gerry Conway, who was just the type of man I was attracted to. It wasn’t long before he made a play for me and asked me to live with him. We shacked up together in a bedsit in Hampstead.

The band often congregated at Roy’s flat for London gigs and my first impression was that they operated in a haze of marijuana smoke. Gerry often took me to Sandy and Trevor’s flat where we had evenings playing Monopoly or cards; they were all avid Monty Python fans, while consuming quantities of booze and pot. I tried it once but the mixture of Southern Comfort and pot made me sick. They were all good-time guys living life to the full. Often we went to the Rainbow or the Marquee and other venues to watch their contempories in concert: to see Long John Baldry, Gary Glitter, Marc Bolan. Late at night we went down the Speakeasy, the hangout of the pop stars, to watch a live band play, dance; and after a night smoking pot they got the incredible munchies and so we ate wonderful Speakeasy food at three o’clock in the morning.

In addition to being a very gifted bunch of musicians at the peak of their performing powers, those were the days of their lives; they were joyful, reckless, larger than life characters enjoying London in the great decade of the Seventies. As a mere mortal without a musical bone in my body I was somewhat overwhelmed by them all. Sandy was always the centre of attention. The affinity between them all was typical of the times of sexual emancipation; Gerry told me that he, Pat and Trevor had all had Sandy at different times and so in a sense there was a carnal intimacy between them all. That was not so unusual in those times. Sandy was a domineering little person who had them all wrapped around her little finger! All the guys were tall, the smallest was Jerry Donahue, who was a straight-looking American - the others were all flower-power people. Trevor Lucas was incredibly tall with long red hair and a voice like a foghorn. Pat Donaldson, also very tall and loud, was a beautiful man with long dark hair cascading down his back when I met him. Pat was an ex-public school boy who spoke with a put-on Cockney accent. Trevor was the Daddy of the group; Sandy, rotund, tiny, feisty and clever, was the mother. Fotheringay gave their farewell concert at the Queen Elizabeth Hall in January 1971. For some reason I remember their manager Roy Guest (‘Guestie’) turning up in a red velvet suit. The final performance did not seem to be an unhappy affair but I think the end was caused by disharmony with their record company, perhaps a better financial deal awaiting Sandy. I was struck by the innovative musicality of their music - the perfect ease at which they operated as a unit in performance. Most of them had previously played together on the music scene for years. Gerry Conway, Jerry Donahue and Sandy were only 24 when Fotheringay folded and although they had all served apprenticeships with named bands since their teens they were blissfully unaware of what they were giving up - musicians playing that well together is a rare and precious chemistry, a gift given to few. They discarded a magic that could never be repeated or manufactured. It was an ill-judged move and one which Sandy regretted in time to come. She suffered abominable stage nerves and somehow her intimacy on a personal and musical level with the guys insulated her from falling apart while she was part of a band. At that stage she was far too highly strung and insecure to turn to solo performances. The second time I heard her performing as a solo artist she was in a terrible state. I was backstage for the second set of her performance and as soon as the curtain came down she fell off her piano stool and onto the floor under the grand piano, where she sat in a huddle, head buried on knees for at least an hour after the performance.

We once dined with her in a Covent Garden restaurant (possibly Joe Allen’s) and after the meal while we were taking coffee and liqueurs she suddenly broke into song and the crowd of other diners gradually became silent and you could have heard a pin drop while she sang. Without a microphone or the accoutrements of voice-enhancing technology Sandy’s marvellous voice had incredible resonance; her singing sent shivers up the spine. She sang a lovely ballad in that amazing voice to an awed hush and when she finished a huge cheer of applause from all the diners made her flush with pleasure.

The year of Sandy Denny’s death is jam packed with memories, almost too many to be more than a scrapbook in my head. Pages of flashbacks in Technicolor of events to be digested in retrospect in 2007. Sandy came to see us several times with her square-faced Airedale dog Watson, who had a sandy and white coat that looked as if it was permanently waved. She doted on the animal. Sandy loved Gerry Conway and she liked me and approved of me in Gerry’s life. By 1978 she dressed in beautiful expensive hippy clothes. She was small and curvy and charismatic and funny with her fabulous husky bell-like voice, equally resonant in conversation as in singing. She was socially adept, full of fun and laughter, and in everyday life there was no hint of the highly-strung intensity and the crippling stage nerves. But towards the end there were emotional outbursts and signs that her marriage was running into serious trouble. She ran away to London from rows, leaving Trevor alone with the baby at the cottage. Once we visited them there at the idyllic cream-painted brick cottage with hollyhocks growing round the front door. The ceilings were far too low for the guys, particularly Trevor Lucas! Sandy had superb taste; the cottage was painted cream throughout, the bland colour enhancing her beautiful pine furniture, collection of aspidistras, long-fringed satin Biba lampshades and Tiffany lamps which lit up dark corners with pools of jewel-like colour.

Towards the end Sandy came to Achilles Road to stay with us with nothing but the clothes on her back, on the run from Trevor. She was an emotional wreck, face mottled, tears streaming down her neck, inconsolable! Sandy had fought a battle with cocaine but alcoholism was leading her by the nose. She was drinking to anaesthetize her pain. I wish I had been more of a woman to her, more understanding and helpful in her hour of need, but all I could do was listen, comfort her by being an ear, and offering her a mattress on the floor of my baby’s bedroom for the night. I took my baby into our bed and in the early morning when I got up I looked in on Sandy and have this snapshot memory of her lying there asleep, dressed in exquisite black jersey underwear, her abundantly curly, cascading fair hair framing her face, looking absolutely beautiful.

Postscript, January 2010: I was saddened to learn, via her son Jerome, that Jill Broun passed away on 10 January 2010. 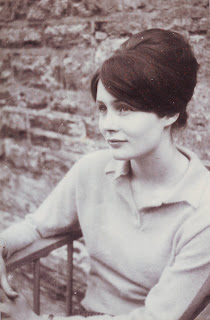 Postscript, January 2011: I didn’t include Jill’s account of Sandy’s last days, which has appeared elsewhere, as it differed from the Revised Standard Version of events. On 22 January 2011 The Guardian published a letter quoting a medical prof’s opinion that Sandy’s symptoms, as Jill (left) described them, were consistent with a diagnosis of Wernicke's encephalopathy: “a disease caused by vitamin (thiamine) deficiency, and easily treated by supplements, it is common in alcoholics and can also cause mid-brain bleeds.”
Posted by Philip Ward at 15:17 8 comments: Links to this post